Imagine you’re swimming in a muddy river, trying desperately to peer through the muck. You face a swirl of confusing obstacles. They have names like Twitter, Facebook, Instagram, children, job, vacations, texting and a thousand other distractions.

The muck is modern life.

So it’s no surprise that the spread of “mindfulness” has exploded in the past decade, with athletes, entrepreneurs even health systems adopting a technique first introduced in meditation centers to minimize distractions and still “monkey mind.” 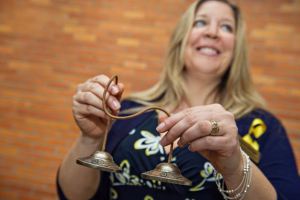 The Presence Care Project is Manteau-Rao’s nascent effort to infuse these worlds with a Zen-like tranquility to spread a blanket of calm over emotional scenarios typically fraught with frustration, exhaustion, anger and despair.

While Manteau-Rao was already skilled in mindfulness, with a regular meditation practice and training at Zen Hospice in San Francisco, she knew virtually nothing about dementia until her mother, living in France, began showing signs of the disease in 2004. At the time, she saw Bay Area mindfulness teacher Jack Kornfield’s book A Path With Heart on her bookshelf. A light went off.

“It’s such a natural fit, mindfulness and dementia.”

But there was a problem. “There was no training that was specific to the unique challenges of dementia care.”

Based in the Bay Area, Manteau-Rao created a caregiver curriculum with these underlying tenets: leave behind personal agendas and the need for speed. Instead, be present. Offer choices. Help those with dementia feel both needed and useful. Most important, try to see the world through their eyes.

In other words, flip the caregiver switch from finishing tasks to creating empathy.

In fact, in her book “Caring for A Loved One With Dementia” she cites several essential emotional needs for those with dementia: to make choices; to be useful; to boost self-esteem; to care and be cared for; and to love and be loved.

She piloted the newly-named Mindfulness-Based Dementia Care (MBDC) program at UC San Francisco’s Osher Center for Integrative Medicine. There, she standardized the caregiver training for 16 hours over eight weeks.

Caregivers are taught to first stop and connect with the dementia patient, to “check in” and see them as a living, breathing person instead of merely a task to be accomplished. Walking together is done slowly and mindfully. If caregivers ever feel rushed they are encouraged to stop, take two breaths, then continue.

“That can make such a difference in how the person receives the care,” says Manteau-Rao.

Nancy Keegan’s San Carlos-based adult day care facility was struggling with lost funding and dwindling attendance when she introduced MBDC into a site that caters largely to clients with dementia. The result: better attitudes, improved care, and a rising census.

“I know you have a checklist you need to get done during the day,” Keegan told her staff before the training. “If you take 5 minutes to be really present with this person, it will take you less time.”

The training wasn’t always easy. She recalls one defensive staff member who thought mindfulness training was eye-rollingly silly. Yet after applying what she learned, after just a few sessions she became one of the program’s biggest supporters.

“Every challenging behavior is an expression of an unmet need,” says Keegan.

Clients often craved the simplicity of small tasks that would involve them in the facility’s smooth functioning. Keegan says one elderly woman with dementia had a favorite role: helping with lunch.

“She loved especially serving her table where her friends were sitting.”

Not only did Keegan’s 10 staff members take the training, but so did four family members.

“It helped them to have a greater sense of calm inside themselves,” she says.

Yet Keegan’s departure from the center a year ago illuminates an important aspect of the program – persistence. Keegan had to maintain constant vigilance over the program, which dissolved when she left the San Carlos site a year ago to focus on her family.

“You need someone who’s passionate about mindfulness and dementia,” agrees Ymke Dioquino, who has worked in the dementia field for 28 years and now oversees MBDC at California Pacific Medical Center’s Ray Dolby Brain Health Center, operated by Sutter Health.

After “stalking” Manteau-Rao for more information two years ago, Dioquino began supervising a small study of 15 family caregivers and this summer reported the results: reductions in anxiety, depression, stress and isolation for the patients. They were easier to care for. Because they had more control over their lives, their sense of wellbeing improved.

“By class number three, I see a shift happening where all of a sudden [caregivers] get this hope in them,” she says, “and to realize they can influence this situation and influence the way they’re in it. They’re able to connect with their loved one again.”

So far, Dioquino has trained about 50 caregivers and continues to offer the course three times a year.

Manteau-Rao insists that pairing the “warm, buzzy, humanistic, spiritual aspect of dementia” is only half of the dementia equation.

“That tends to be split from the harder side of dementia, that it is a disease and there’s a neuroscience behind it,” she says. “I believe that you have to understand what’s going on in a person’s brain to be compassionate with them… Knowledge needs to inform that compassion.”

Of the 15 common types of dementia, Manteau-Rao says most people suffer from at least two at a time, all of which cause further health concerns like diabetes, COPD, and chronic pain.

For example, one condition – PseudoBulbar Affect – can cause uncontrollable bursts of laughter or tears. A caregiver might mistakenly assume a patient is depressed when in truth the brain is simply misfiring.

Laura Rice-Oeschgeer remembers the day she stumbled onto Manteau-Rao’s work.

“I found her!” she screamed to colleagues at the Michigan Alzheimer’s Disease Center at the University of Michigan.

Today, Rice-Oeschgeer is the lead trainer for The Presence Care Project and the university is now the epicenter of MBDC as Manteau-Rao immerses herself in the startup Neurocern, a digital suite of tools to diagnose and treat dementia using videos, podcasts and text. (“We believe that this is really going to change the way persons with dementia are cared for,” she says.)

Besides the eight-week training course offered twice a year, Rice-Oeschgeer also offers an ongoing monthly meditation on campus for caregivers.

“We don’t have formal networks for care partners to practice the will power and endurance needed to support years and years of caregiving,” she says. “Over time that stress reactivity clouds any real connection, so the person [with dementia] can’t be seen.”

So far all MBDC training has been held in person, so she also plans a fall webinar to reach people around the country.

Rice-Oeschgeer says that there’s nothing “extra” to do to become a mindful caregiver — not even a regular mediation practice.

“The act of caregiving is the practice,” she says. “It’s through it that we have more meaningful connections.”