When people talk about dementia, Alzheimer’s disease often automatically comes to mind. That’s not surprising since it’s the most common type of dementia, affecting 5 million Americans, according to the Centers for Disease Control and Prevention.

But with more than 100 dementia causes, Alzheimer’s shouldn’t be assumed. Along with Alzheimer’s, Lewy body and vascular dementia — the kind related to stroke — make up the top three types of dementia affecting older adults. 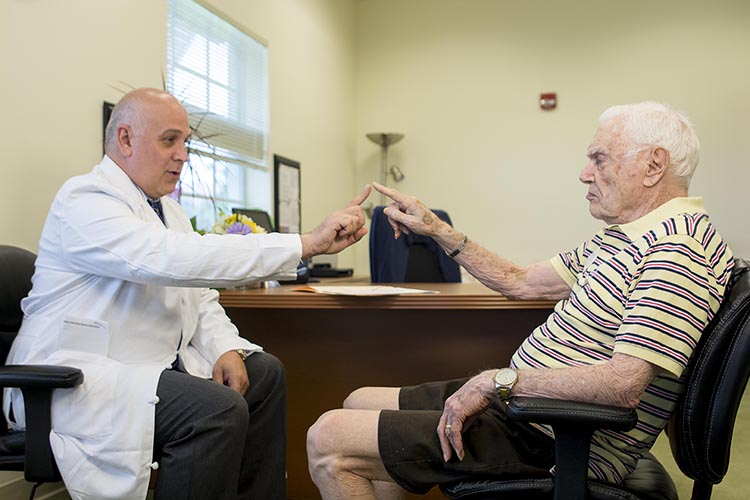 ,” says neurologist Dr. James Galvin, a professor and associate dean of the Charles E. Schmidt College of Medicine at Florida Atlantic University. “And each of the different dementias has different symptoms, a different rate of progression and, in some cases, a different treatment approach.”

“My husband had some Parkinson’s symptoms, but he wasn’t responding to the Parkinson’s meds the way a normal Parkinson’s patient would,” Cathy Flanagan says. “Then he started to have more psychiatric symptoms. The delusions and hallucinations.” Finally, the correct diagnosis was made.

Memory is affected early in Alzheimer’s, particularly retention of new information, Galvin says. People struggle to come up with words or names. Forgetfulness of where they’ve put familiar objects, problems with numbers and mood changes are common.

In the brain, plaques made up of amyloid protein, along with tangles composed of tau protein, are hallmarks of Alzheimer’s disease. Amyloid and tau can be detected with positron emission tomography, or a PET brain scan, and also measured in a person’s spinal fluid.

While there’s no cure, medications called cholinesterase inhibitors, such as rivastigmine, Aricept and Exelon, as well as the drug memantine, are used to treat disease symptoms and slow progression for Alzheimer’s and Lewy body disease.

Unfortunately, with these drugs, “the effect size is relatively small,” says Dr. Thomas Wisniewski, a professor of neurology, pathology and psychiatry, and director of the Center for Cognitive Neurology at the NYU Langone Medical Center. “So there’s great need for better therapeutic approaches.”

In the case of Alzheimer’s disease, he says, “there are a number of therapies now in fairly advanced phase III clinical trials that have hope of more directly affecting the underlying pathology, which then might really slow things down.”

Visual-spatial issues, such as difficulties with depth perception and visual memories, are significant early signs of Lewy body dementia, which affects 1.4 million Americans, according to the Lewy Body Dementia Association. Hallucinations and sleep disturbances are also symptoms. Talk therapy and other types of psychotherapy help manage these symptoms, along with certain medications.

Lewy bodies are made of an abnormal protein called alpha-synuclein that clumps in the brain. Parkinson’s disease dementia, although it has different causes and treatments, comes under the LBD umbrella.

As with Alzheimer’s, agitation can occur with Lewy body disease, but extreme caution must be used in treating behavioral symptoms with drugs, Wisniewski says, particularly antipsychotic drugs. “There can be very significant side effects and much worse confusion with their use,” he says. “It’s important to be very careful in the use of antipsychotic medications, in that Lewy body patients often respond very, very poorly to that class of medications.”

Hallucinations may appear in the later stages of Alzheimer’s, in which the patient “sort of sees shadowy figures in the corner,” Galvin says. “And they’re frightening to the patient.”

Lewy body patients have a different experience. “The Lewy body dementia delusions are very specific,” Flanagan says. “They’re very detailed hallucinations.” For instance, she says, people may see children playing or little animals. The best response is to redirect people’s thoughts, she says, rather than risk medication side effects.

Vascular dementia can arise after a single large stroke or after multiple mini-strokes. Treatment is aimed at preventing further episodes. “If you have vascular dementia, working on reducing stroke factors is going to be really critical,” Galvin says.

For someone with vascular dementia, following a healthy diet and taking the right medications to keep conditions such as high blood pressure, high cholesterol or diabetesunder control is crucial.

Along those lines, “you want to make sure that blood pressure, cholesterol, lipids and glucose are well-controlled,” Wisniewski says. “Often you would want to use a blood thinner, which would be an anti-platelet agent like aspirin or Plavix.” For patients at higher risk for blood clots or embolism, he says, stronger anticoagulant medications such as Coumadin or Pradaxa might be needed.

To further complicate matters, symptom overlap exists among the different kinds dementia — and people can have mixed dementia.

If you suspect that you or a loved one might have signs of early dementia, make sure to see a specialist — such as a neurologist, geriatrician or geriatric psychiatrist — who can sort out symptoms, perform brain-imaging tests and mental status exams and reach the correct diagnosis.

Awareness has increased, Flanagan says, particularly in the past year or two. “I think a lot of doctors are picking up on it a lot quicker,” she says. “Because we are getting Lewy body as a first diagnosis.”

As dementia progresses, the burden on caregivers grows. “It’s very difficult for one person to do 24/7,” Flanagan says. “We try to get the caregivers to have a team, whether it’s hired help, day programs, assisted living programs or family that comes into the home and helps.” For all types of dementia, caregiver support groups reduce isolation and help people find others who know what they’re going through.

“One of the core symptoms is fluctuation in cognition,” Flanagan says. “If you’re a having a lucid and a really good day with your husband, wife, father, daughter — whoever it is — grab those moments. Because they’re going to come less and less often as the disease goes on. I had three daughters helping me, and that’s pretty much what our goal was — to make every day the best we could.”