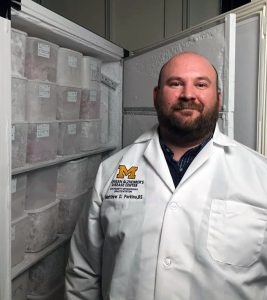 Matthew Perkins is the coordinator of the University of Michigan Brain Bank. The Michigan Brain Bank collects, stores, and distributes brain tissue to the scientific community to support research into a variety of neurological diseases, including Alzheimer’s disease and related dementias, Parkinson’s disease, Huntington’s disease, ALS, and bipolar disorder. This program, and other brain banks like it, are essential to the advancement of research into our understanding of these and other disorders of the brain. Examining brain tissue helps researchers better understand the causes and progressions of these diseases as they seek to develop potential treatments and preventive strategies, and improve diagnostic methods.

This important resource is only possible because of the generosity of individuals who choose to donate their brains to science. At the University of Michigan, the Brain Bank receives donations from donors who have been participants in affiliated clinical research studies, such as those here at the Michigan Alzheimer’s Disease Center. Those individuals and their families who are interested in brain donation discuss and consent to the process well in advance of the time of death to ensure that all preparations are in alignment with the wishes of the patient and their family, without added burden or cost during a difficult time. 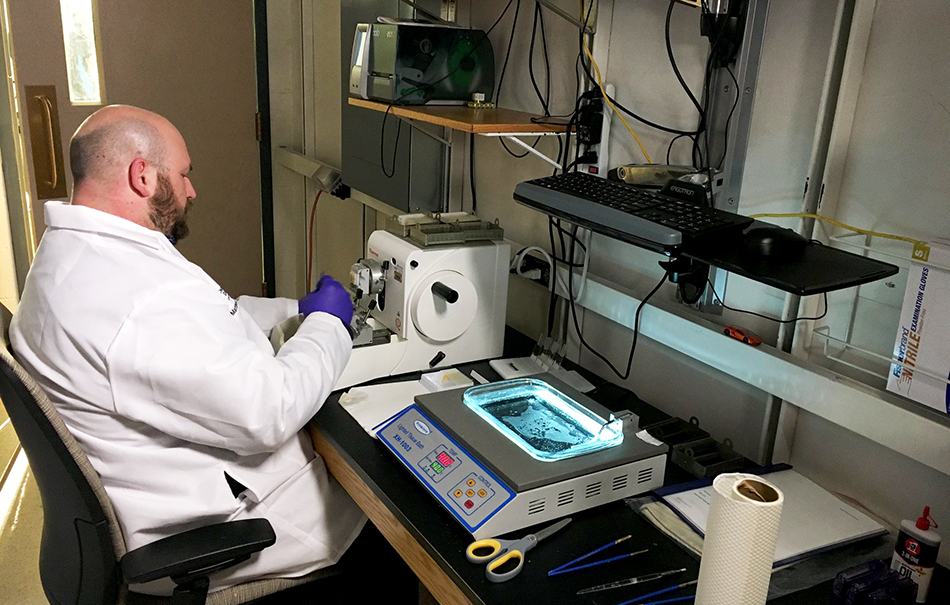 Matthew Perkins sectioning fixed brain tissue embedded in paraffin. He is using a rotary microtome and placing the tissue in a Tissue Float Water Bath that is set at 40 degrees Celsius. 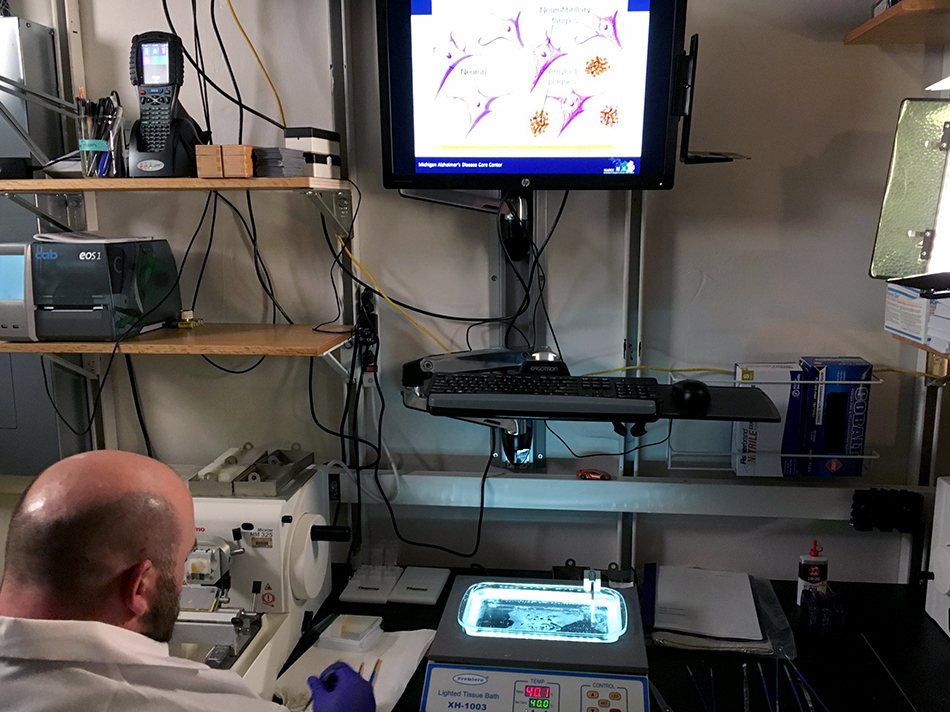 Matthew Perkins sectioning fixed brain tissue embedded in paraffin. He is using a rotary microtome and placing the tissue in a Tissue Float Water Bath that is set at 40 degrees Celsius. The computer screen shows a graphic visualization of what a plaque looks like in a neuron.

Matthew coordinates everything that has to do with the Michigan Brain Bank, from performing autopsies to distributing tissue to researchers. When a donor passes away, Matthew is the person their family calls—24 hours a day, 7 days a week, 365 days a year. He arranges logistics—speaking with families, hospice nurses, funeral homes, pathologists, and others—conducts the autopsies (or coordinates out-of-state autopsies when necessary), and facilitates the process through which pathologists and students at U-M analyze the retrieved brain. 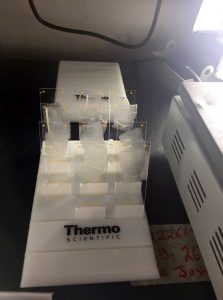 Matthew also coordinates the distribution of brain tissue to researchers both at the University of Michigan and across the country. When a brain is donated to the Brain Bank, one half is frozen for long-term storage and the other is preserved with a fixative and then embedded in a paraffin wax block. Researchers can request small sections of either paraffin or frozen tissue. A typical section is just 5 microns thick, so one brain could potentially contribute to hundreds of studies.

Matthew first came to the University of Michigan as a student with a fascination with anatomy and how the brain works. After studying brain behavior and cognitive science, he went on to work with Dr. Roger Albin in his Huntington’s Disease lab, where he learned tissue sectioning, immunohistochemistry, and how to extract brains. After working for a year with Dr. Albin, who was the director of the Michigan Brain Bank at the time, Matthew learned that the Brain Bank coordinator at the time had decided to quit, and he applied for the position. Over the past five years, his job has grown dramatically, from doing only coordination tasks when he started, to conducting autopsies and expanding the Bank’s capacity for tissue distribution.

While his interest in neurology set him on his path to his current role at the Brain Bank, Matthew says that his favorite part of the job is working with people: “It’s very rewarding to be able to give back to these patients and their families, who have gone through a lot. When we do these autopsies and accept these donations, we’re really fulfilling the wishes of the loved ones. They’ve decided they want to make a contribution to research and we’re just here to make sure that they can.” Dementia can only be diagnosed through post-mortem autopsy, so brain donation can also serve an important role in providing closure for the family when they receive the final autopsy report. But ultimately, Matthew says, the choice to donate is often driven by a desire to support the research. “Most of the time, the attitude is: I’ve suffered and I don’t want someone else to have to suffer. So if I can do something to prevent that… They’re often thinking about others when they make this decision.”

One half of each donated brain is frozen for long-term storage.

Learn more about the Michigan Brain Bank at brainbank.umich.edu.